On November 8, 2022, voters in Maryland and Missouri overwhelmingly approved ballot measures to legalize recreational marijuana, becoming the 20th and 21st states to do so. And, as part of the ballot initiative in Missouri, the existing medical marijuana law was amended to include express employment protections for medical marijuana cardholders. At the same time, voters in three other states—Arkansas, North Dakota, and South Dakota—rejected similar ballot measures. 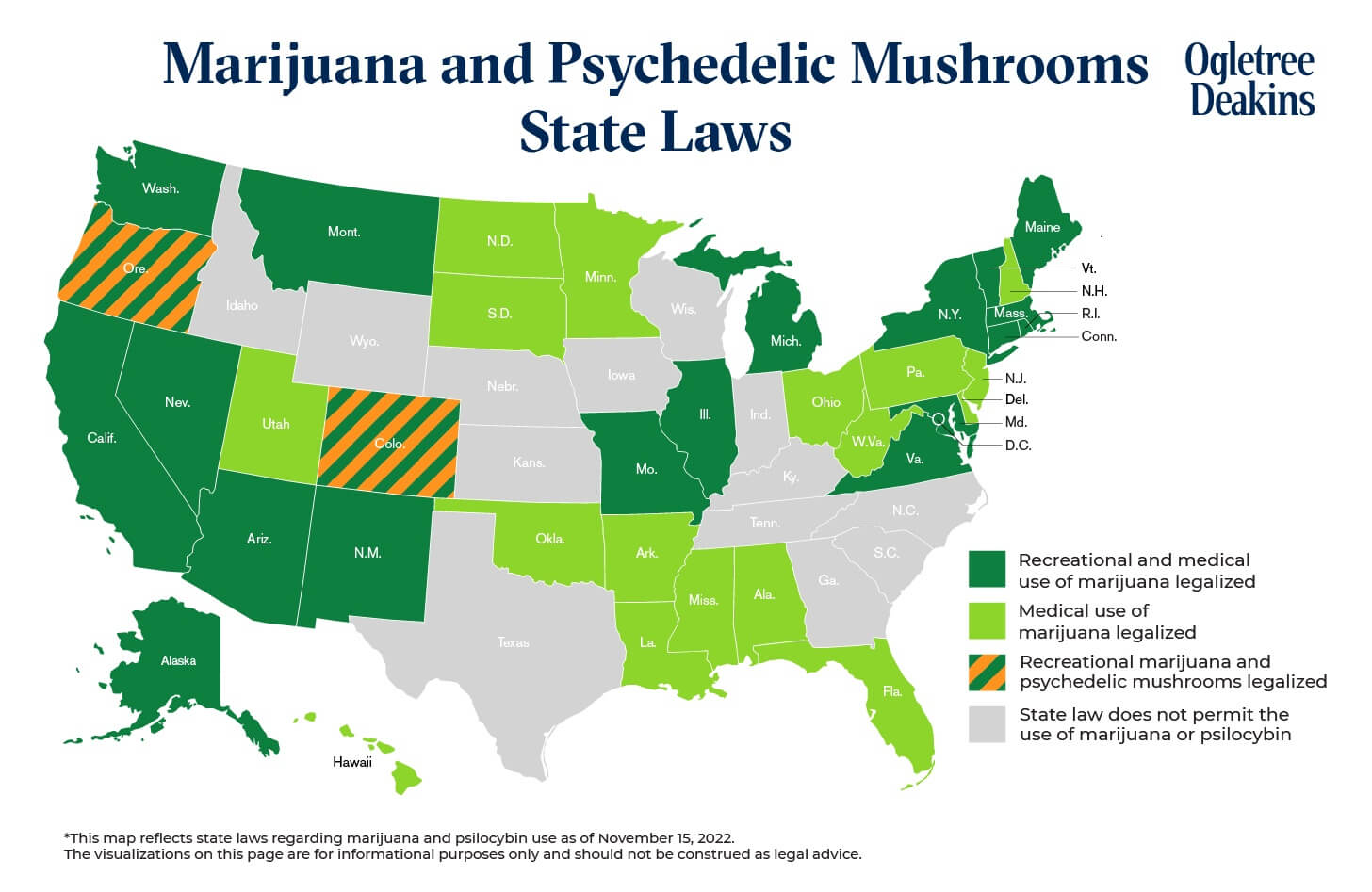 Voters in Maryland overwhelmingly approved Question 4 with nearly 66 percent of the vote to amend the state constitution to allow for recreational marijuana use by those 21 years of age or older.

Accompanying legislation passed by the state legislature, House Bill (HB) 837, will go into effect due to the voter approval of the referendum. HB 837 specifically allows the possession and personal use of up to 1.5 ounces of marijuana or 12 grams of concentrated marijuana beginning on July 1, 2023. The bill further extends decriminalization of marijuana until that date and would provide for the expungement of criminal offenses made legal by the act. However, the bill would prohibit the smoking of marijuana in places where smoking of tobacco products is prohibited, including indoor places of employment.

Beyond generally legalizing marijuana for recreational purposes, HB 837 does little to address employer rights to prohibit employees from using recreational marijuana. As such, Maryland employers may still be able to enforce workplace drug policies and testing programs even if the referendum passes. However, employers in Maryland should remain mindful of potential disability discrimination and accommodation considerations when handling employment issues involving medical marijuana cardholders.

Voters in Missouri passed Amendment 3 with 53 percent voting in favor and 47 percent voting against, according to the Missouri Secretary of State. The measure revises and amends the state’s existing medical marijuana provisions, as well as permits those twenty-one years old and older to legally possess, purchase, consume, and cultivate marijuana for recreational purposes. However, most importantly, the measure amends the state’s medical marijuana provisions. It is set to take effect on December 8, 2022.

Beyond legalizing marijuana for nonmedical purposes, the measure provides employment protections for medical marijuana users. Specifically, Missouri’s medical marijuana law will soon prohibit employers from discriminating against an employee because he or she: (1) possesses a medical marijuana identification card; (2) lawfully uses marijuana off the employer’s premises during nonworking hours; or (3) tests positive for marijuana unless the employee was using, possessing, or under the influence of marijuana while at work.

The legalization of marijuana for recreational personal use continues to slowly spread across the United States though the recent elections shows that the population in certain areas of the country remain hesitant to legalize marijuana. Broader legalization could create additional challenges for employers in seeking to maintain drug-free workplaces. Employers in Maryland and Missouri may want to review their drug use policies in light of the new recreational marijuana legalization measures.

Ogletree Deakins will continue to monitor developments with respect to marijuana legalization initiatives and will post updates on the Drug Testing and State Developments blogs as additional information becomes available. In addition, further information on federal, state, and major marijuana laws and guidance on compliance with the same is available via the firm’s OD Comply: Marijuana subscription materials, which are updated and provided to OD Comply subscribers as the law changes. Important information for employers is also available via the firm’s webinar and podcast programs.

Authors: M. Tae Phillips (Birmingham); Zachary V. Zagger (New York)
View source article
This article was drafted by the attorneys of Ogletree Deakins, a labor and employment law firm representing management, and is reprinted with permission. This information should not be relied upon as legal advice.

On November 8, 2022, voters in Maryland and Missouri overwhelmingly approved ballot…

On November 8, 2022, voters in Colorado passed a ballot initiative to decriminalize…